Time for an update, as it’s been a while – too long really.

May 28, 2022 I hit affiliate status on Twitch. And we finished up the giveaway – the lovely Ivie! Please go give them a follow if you’re on Twitch – they’re an awesome human.

Beyond that, life decided to get damn busy for me again, right after I got Affiliate. I’ve got some basic channel point stuff done, and some merch ready. But I’m not where I want to be, and of course, that bothers the hell out of me.

As well, I had a lot of things that I’ve kept holding back burst through. Now, it’s not harmful stuff that I was keeping back, but more that I’ve been conditioned, especially being a person who is on the autism spectrum, that I must look, act and just be a certain way to be accepted as passing as a “normal” human. It’s called masking, and any neurodiverse person will tell you, it’s exhausting.

I also managed to really irritate my back injury, and that left me both in pain, and feeling down, more than before. So, with the support of so many people, I hit pause and have been collecting my thoughts, talking to my support network, and deciding what I wanted to do going forward.

I still have quite a bit to go, but I am happy with the direction things are going behind the scenes now. I’m working on trying to strengthen my core muscles, even though the issue with my spine isn’t related to them.

So that’s this update. I’m hoping to get myself motivated to post at least once a week here, hopefully more. 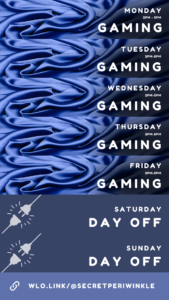